I have chosen to call my project Surviving Politics with a specific interest in how the individual makes a difference in an unjust world.

From a young age I thought I was one of the oppressors. (Marlene Dumas, Miss Interpreted.)

From a young age I felt I was a sympathetic ‘activist’. (Jacqui Chapman)

My Presentation will focus on: 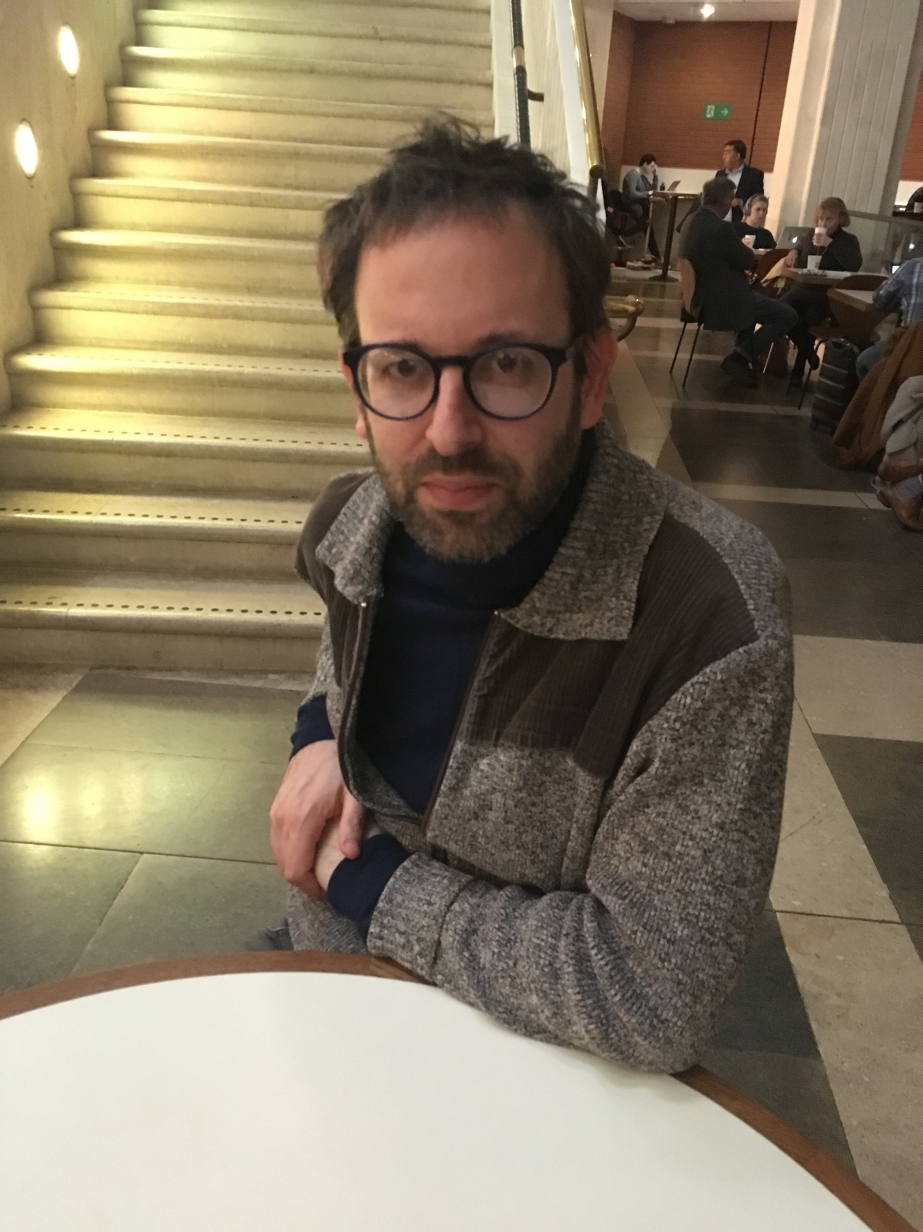 I met Ariel Caine of Forensic Architecture at the British Library for an informal conversation about the Ground Truth Project, for which he is the co-ordinator. He is also an artist; an analogue and skilled digital mapping photographer. The point of this research is to expose human rights abuses, and in this case they are land rights of Israeli Bedouins which he calls a “forgotten people in a disappearing landscape”. The territory in question is the far north of the Negev and Naqab deserts where they appear to have no claim to, according to the Israeli Government.

Ariel explained their manipulation of information using mapping techniques from satellites where the pixels are so distorted detail becomes questionable. Ariel’s team use a simple technique where cameras are placed in bottles attached to kites and flown at low level to gather relevant detailed visual information. This technique was used successfully on small boats during the BP Gulf of Mexico Oil spill in 2010, where crucial evidence at low level was recorded in this way during a no- fly zone over the spill area. This led to BP’s conviction of gross safety negligence and a massive $4.5 billon fine. Here, in the desert, the kite images show habitation, ruins, agricultural sites, wells and burial sites, proof that they lived in settlements where they have had rights for centuries. This data is combined with sophisticated grammar mapping which is laid over Google Earth terrain to get a real reading of the land.

One of the problems Ariel explained has to do with language in law as this forms the basis of arguable legal rights. The Bedouin lifestyle can be nomadic, they sometimes live in tents, and this has been a way of life for centuries. They don’t fit a western model.

They have land agreements and some proof of these exist often between neighbours, but little was registered with the officials at any time from the Byzantine era to Colonial times in the 1920’s to the formation of Israel in 1948.

Ariel is passionate about documenting this disappearing landscape in which the Israeli State not only displaces people from their villages but it destroys them and relocates them in state built villages where there is no water or electricity, whilst they, the Israelis, green the desert by planting forests. This gives them ownership of disputed land where the Bedouins are considered trespassers having no history with the landscape.

All of the evidence collected will be used in a trial they are waiting for a court date on some time this year. Ariel Caine has just completed his PHD on this.

We discussed The Turner Prize nominations, The Long Duration of a Split Second in particular, and I said this was how I came to know about Forensic Architecture and the issues around Israeli State violence. This film is about the Israeli police’s raid and destruction of a Bedouin village. I told Ariel I did not walk out the same as I had walked in. He said that was a great compliment.

He also explained that they don’t set out to make an art film but new audiences from the Turner Prize reputation gains awareness of human rights violations and is a good thing as there are not many open platforms for this type of work to be shown. 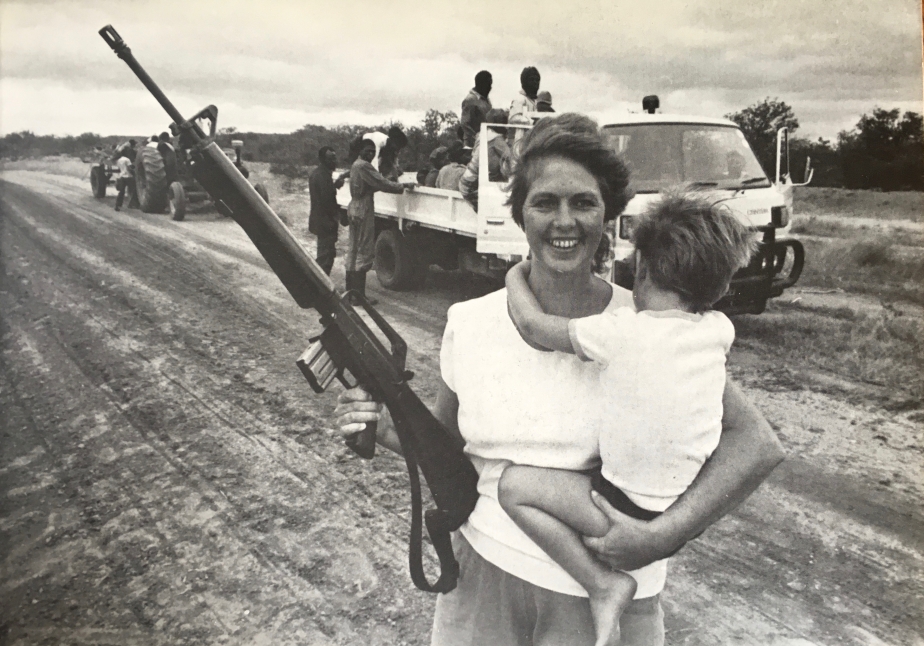 I showed Ariel this photograph, taken by Juhan Kuus of White border farmers in the Northern Transvaal in 1985 in South Africa, during the height of apartheid. This area borders Zimbabwe, not far from where my father lived.

We talked about the current situation in South Africa where land rights are a major issue too and where the majority of farmers are Afrikaans. In the four years running up to the elections the PAC’s pre-election slogan in the 1990’s was ‘One settler. One bullet’.  Julius Malema’s far left Economic Freedom Fighters use it today to stir up support against white farmers.  They want to take back the land. It is political not agricultural. 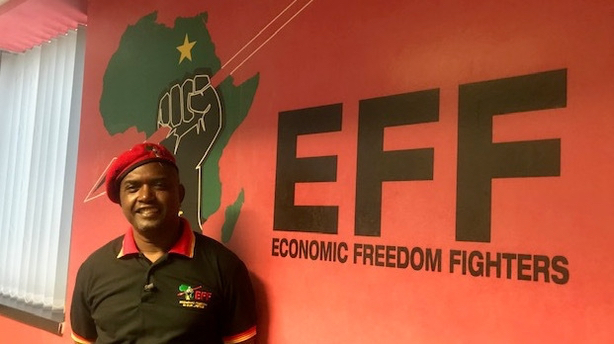 Many farmers and their families have been murdered, some say one every 5 days, and in order to protect themselves, they are armed. 8% of the population own 72% of the land. Undeniably the abject poverty needs addressing.

Land redistribution with compensation is necessary or another Zimbabwe-like situation will ensue with murderous land grabs. The South African government is currently changing the constitution to allow appropriation without compensation.

I have started a painting using Juhan Kuus’ image on a tablecloth I inherited from my grandmother, who farmed a sugar farm in Natal near Durban during the 2nd World War. This references Colonialism. I am considering using ash, clay and earth from South Africa. I have one handful of red stony earth I picked up on the side of the road which I am saving for this painting.

Ariel Caine’s reply to my thank you email:

“The image you showed me was incredible and hasn’t left my mind since. So strikingly vital and disturbing. It was definitely a reminder to go back and read more about past and present situation in South Africa of which I must admit I know very little and can surely learn a great deal from.”

Considering the more specific language of painting, my approach is definitely richer for understanding human rights issues and realise the value in exposing these stories so that they will never be forgotten, perhaps revisited, and hopefully help to change injustices, one person at a time.

I also asked Ariel for a job at Forensic Architecture and he said that was how they all came to work there, believing passionately in something.