Lauren and I were friends at school during apartheid in the 1970’s at Pretoria Girls’ High. We met again on 3 May 2018 at the Ivy Café in Marylebone, London. We discussed and planned my research trip back to South Africa, in preparation for my MA. Many ideas flowed, Lauren generously offering introductions to people she knew who were also making work about apartheid, and to follow up on and meet in Cape Town on my return.

Lauren was the youngest white female human rights lawyer to take on the South African Police representing a black detainee and win, and knows many people who were involved in the struggle against apartheid. She successfully (“not sure I’d call it successful – the haul was too long and dispiriting and it needed the passage of time and history to come to fruition”- quoting Lauren)  – represented David Webster’s family, an activist who was part of the Detainee’s struggle and who was assassinated outside his home in 1989 by Ferdi Barnard. A TRC confession and a life imprisonment sentenced in 1998, of which he served 21 years, and was released on parole in April 2019, 30 years since the killing. I believe this makes the history relevant again on some level.

Lauren also represented Dr Asvat’s family after the doctor was murdered in his surgery during what was made to look like a robbery. Winnie Mandela’s Soccer Gang was believed by many to have been involved in his murder because he knew about their involvement in the killing of Stompie, the young boy beaten so badly he later died from his wounds for being an ‘informer’. This is a complex story not many know about. It raises many questions, including Winnie Mandela’s character, but also about her treatment by the apartheid government who wanted to ‘crush her’. She was in solitary confinement a few times. ‘Every revolution needs a revolutionary.’ I can’t remember who said this. She was not the ‘mother of the nation’. She was a dangerous woman whose mission was freedom at all costs, but she suffered too. Since her death in 2017, just before I returned to SA to research my relationship with South Africa, much has been written and films made about her.

Dr Neil Aggett was detained by the Apartheid Security Branch in 1981 at the notorious John Vorster police cells in Johannesburg. He was found dead under mysterious circumstances on 05 February 1982, a few cells away from Keith Coleman’s. ( See A Knock on the Door book launch in ‘Events’)

An inquest held at the time found that Neil Agget had committed suicide and that the police were not responsible for his death, a finding that was condemned both domestically and internationally. Critical evidence depicting ‘a pattern of sensory deprivation and torture’ was omitted by the ruling magistrate.

“The families of apartheid era victims deserve to get answers on how their loved ones were murdered by the Security Police. Our democratic government has been magnanimous enough to give the perpetrators an opportunity to tell the truth and receive amnesty for the crimes that they have committed in the name of the evil apartheid regime. They chose to sit back and not say anything. Perhaps they hoped that their crimes would be forgotten. We as government owe it to the families of activists like Dr Aggett to get to the bottom of the circumstances under which they died as well as to ensure that their killers have their day in court.”

This inquest was reopened in April 2019. I am considering taking this research further in some way. 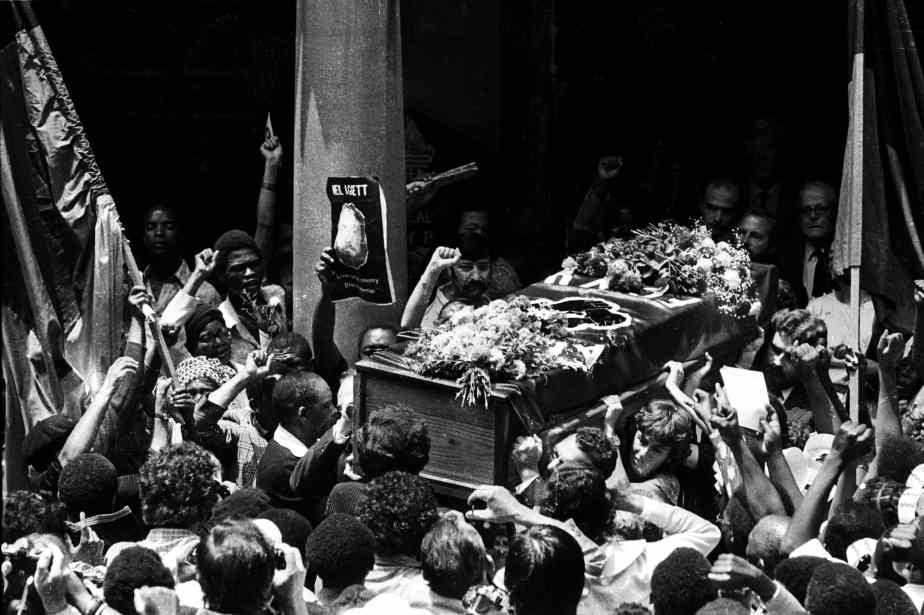 13 February 1982: The funeral of Neil Aggett, the trade unionist and labour activist who died while being held in detention by the security police. (Photograph by Juhan Kuus)

I worked with Ian Calvert at Ogilvy and Mather Advertising in Cape Town. He generously helped with my research in May last year, taking me to see the Red Bull Amaphiko Projects in the nearby townships of Langa and Khayelitsha where Red Bull actively supports grass roots initiatives in an inspirational programme aimed at developing early-stage, community-based social entrepreneurs. These projects often address growing unemployment, especially in the 18-24 year age group. There are many socio-politcal issues, crime being one of them. We visited the 18 Gangster Museum in Khayelitsha, which is an experience of prison life to deter youths from getting involved in crime. We also visited Quirky 30, which was started by ex gangster Sihle Shabalala, who teaches coding to this vulnerable age group preparing students for jobs in the digital market.

Amaphiko means “wings” in Zulu, with an intention for corporations to do more good in society and this is driven by consumer pressure where just making money is no longer acceptable. Ian works globally in 12 countries supporting the individual’s inspired idea as a way out of difficulty and empowerment.

I met Liza Key in Cape Town in my favourite old haunt, Café Paradiso, not far from my  little house at the foot of Table Mountain. Winnie Mandela had just died. Liza was researching a documentary about her. We talked about the inheritance of apartheid,  and how this affected ordinary peoples’ lives in her documentaries. She was very candid about the expectation of healing the “land soaked in blood”. People’s lives were torn apart by apartheid and some believe it will never be over. She thought my intention of not managing the outcome of my ideas was a good position to make work from. Ideas about attachment to landscape, accepting unresolved and changing relationships about belonging without manipulation. Not knowing, or lack of resolution, is an important part of the process of reevaluating this complicated relationship.

Kathy shared her published MA in Fine Art at Michaelis School of Art, University of Cape Town (2015). Her work covered similar areas to mine against the backdrop of apartheid, considering memory and attachment to place, migrancy and displacement, personal and collective history and begins with a memory of looking “Through the Garden Fence”, the title of her MA. Natural cycles are rooted in the concept of caring for the loss of natural areas and indigenous cultures.

I have read many of the books Kathy recommended; J.M. Coetzee’s Age of Iron, and White Writing: On the Culture of Letters in South Africa, and Mark Gevisser’s Lost and Found in Johannesburg, which had an enormous impact on my memory, refreshing the past I once also knew in the 1970’s and 1980’s then living in Johannesburg.

Kathy also works in communities in South Africa on projects that enable sustainable life in difficult impoverished terrain. Her most recent project is about water collection.