To begin with I was interested in the power of an iconic image, using Sam Nzima’a famous Soweto Riot photograph of the police shooting of 12 year old Hektor Pieterson. It became the symbolic image of the struggle against apartheid, but it was also instrumental in making the world take notice of apartheid atrocities and apply sanctions, both economic and cultural. Integrating the image in a painting was difficult. I felt like I needed to treat the image with respect, not paint over it, and not deface it. 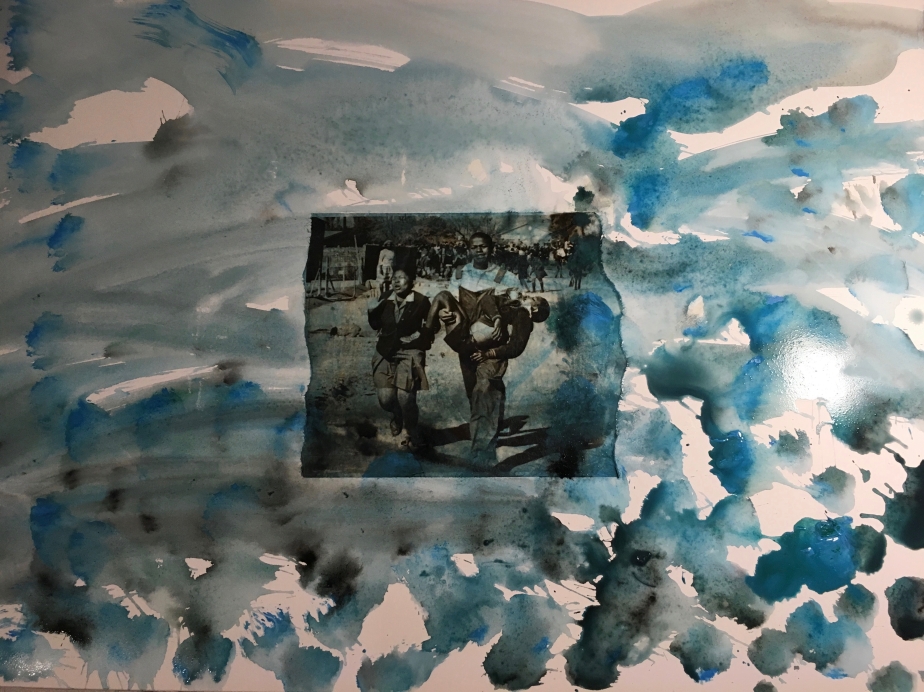 I made a silkscreen print of this same image exaggerating the dot screen in Photoshop. I think this could work better as part of a broader narrative, perhaps included in a painting or a bigger collage. 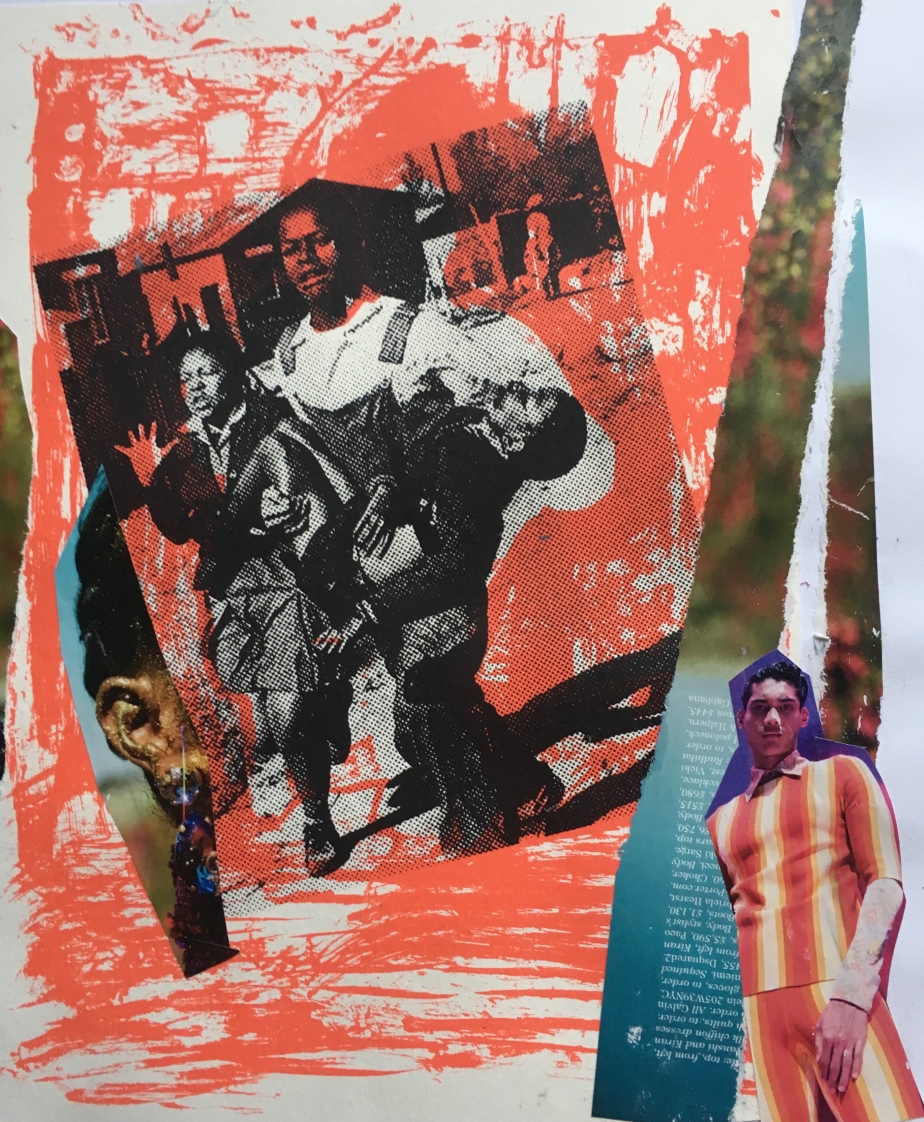 I was experimenting with scale, small 18 mm board paintings in acrylic working out the opposite separate worlds, my mother in the 1950’s, innocent white life using magazine illustration style popular at the time, and my father’s stolen Valiant showing threat and unease on a deserted track. I am beginning to work with ideas about implicit politics, looking at the work of South African painter Kate Gottgens in particular. 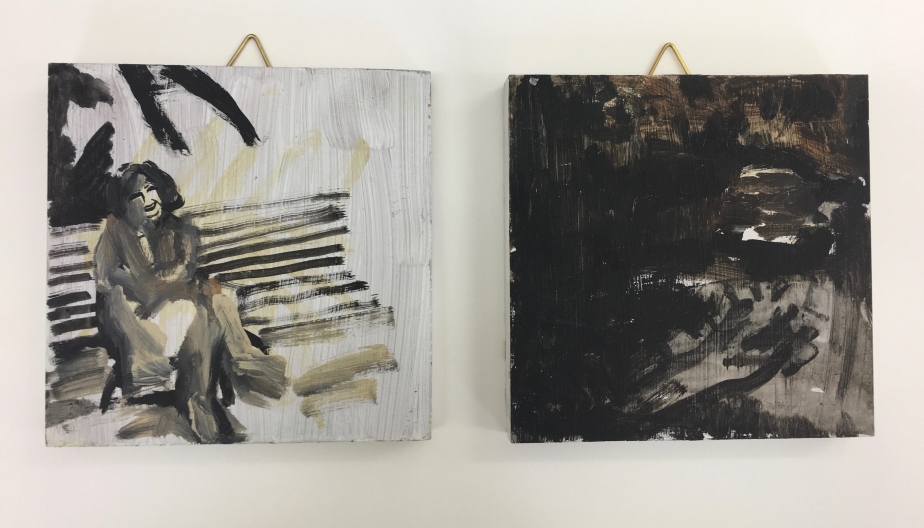 My Mother’s Privilege and Stolen, Acrylic on board, 14 x 14cm

Combining a different expression of separate worlds, this time exclusive gated predominantly white communities where black people work in domestic jobs often as “non-people”. I used Photoshop to make the black woman ghostlike and ‘white’ in my painting White Guilt. The house I reference is part of the gated community I stayed in 2018, St Johns Estate, Higgo Crescent, Cape Town. 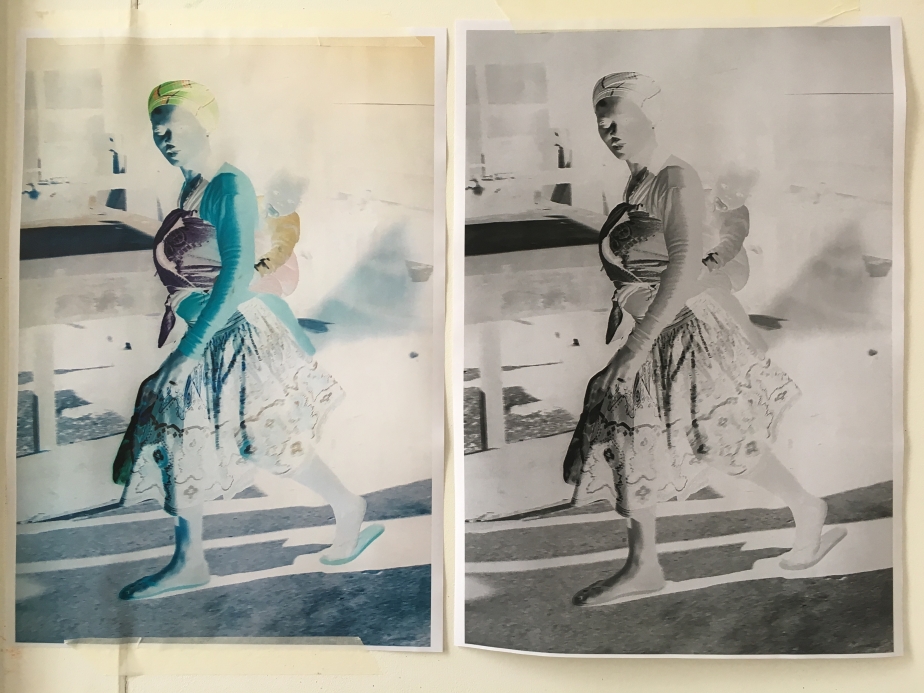 Significant political events where we were an absent witness, including Biko’s controversial head wound death in 1977, threatened the stability of the country fuelling a growing Black Movement. The Soweto Riots in 1976 developed into a psychological landscape where the birthday picnic has a relaxed stillness beside the pool, we were oblivious while the country erupted into mass shootings and violence. The politics is situated in the title, “Vicarious Witness, Soweto Riots, 1976”. I looked at art history’s Dejeuner Sur L’Herbe from Titian to Picasso, and Jules de Balincourt’s BBQ Sur L’Herbe in particular, to help me paint the relaxed figures of my school friends on the grass. 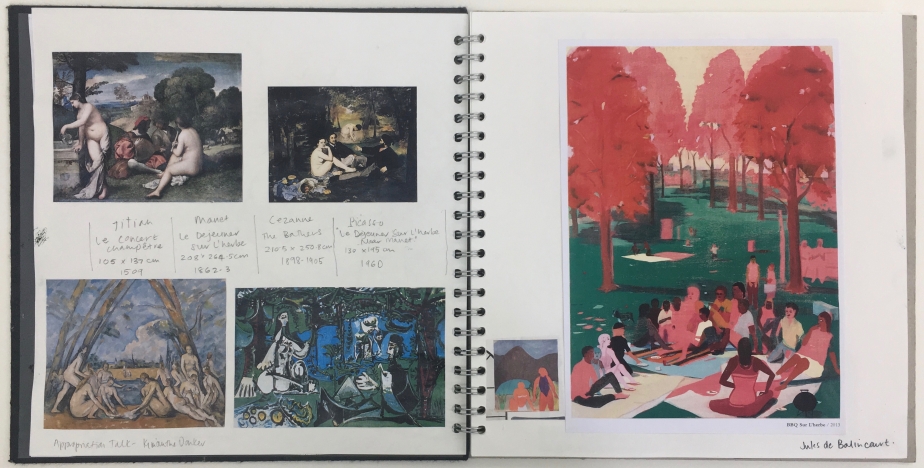 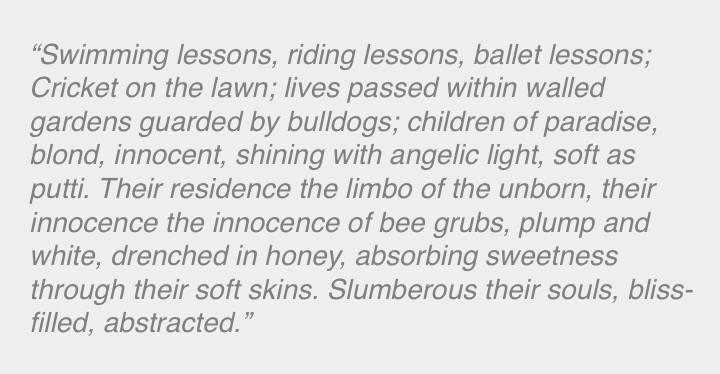 J.M. Coetzee’s evocative language about white children’s innocence being like “bee-grubs” inspired the paintings about my childhood. I found some old photographs of us living our blond, innocent lives, completely unaware of the unnatural way we expected black people to live. 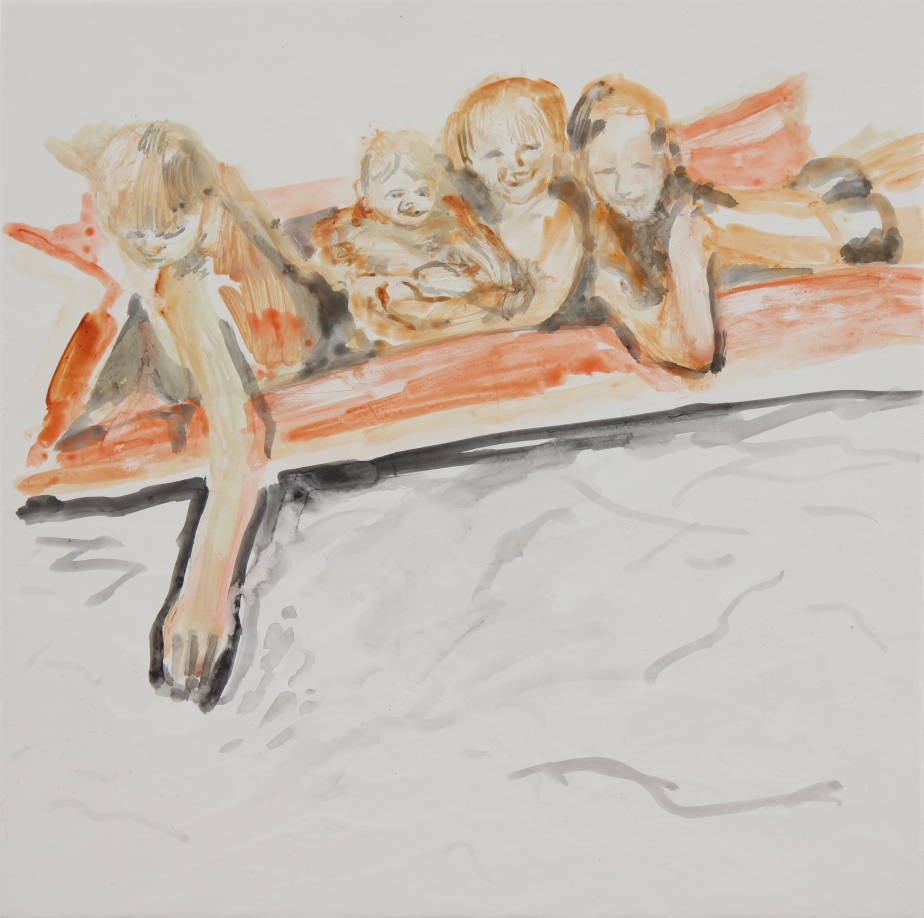 The metaphorical nature of processing memory was enhanced by painting on chalk ground for the first time. It was like nothing I have painted on before, and I liked the low pigment faded quality of application, as if memory was waning. I was thinking of Luc Tyman’s paintings using a limited palette with delicate application.

Collage ideas combine Juhan Kuus’ apartheid photographs from his book South Africa in Black and White taken during the 1970’s and 1980’s, with other images depicting an escape from reality behind the high walls of gated communities. I am trying to exaggerate the execution of the white world to a dream-like fantasy. I can do more materially using fake paints, glitter and gloss perhaps. The influence of film stills to create unease, like Doig’s Friday the 13th and Peter Weir’s 1975 Picnic at Hanging Rock, is an atmosphere that sits just below the surface and a direction my ideas are taking. 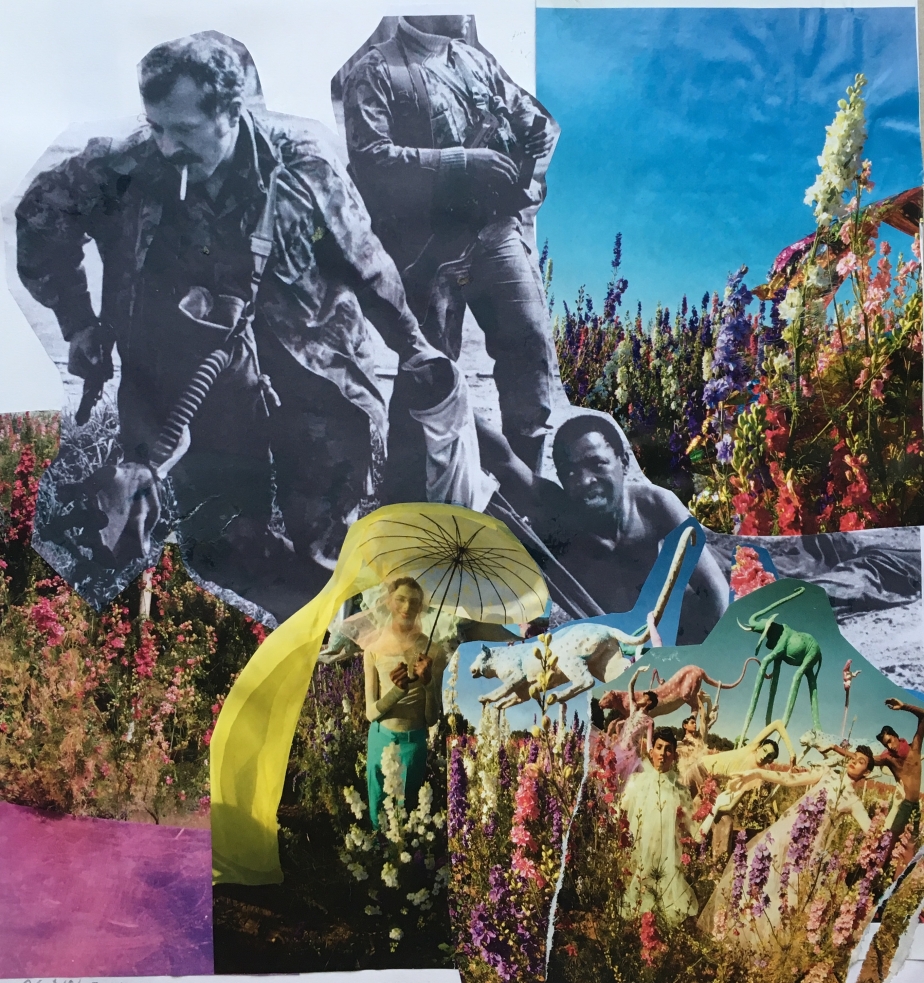 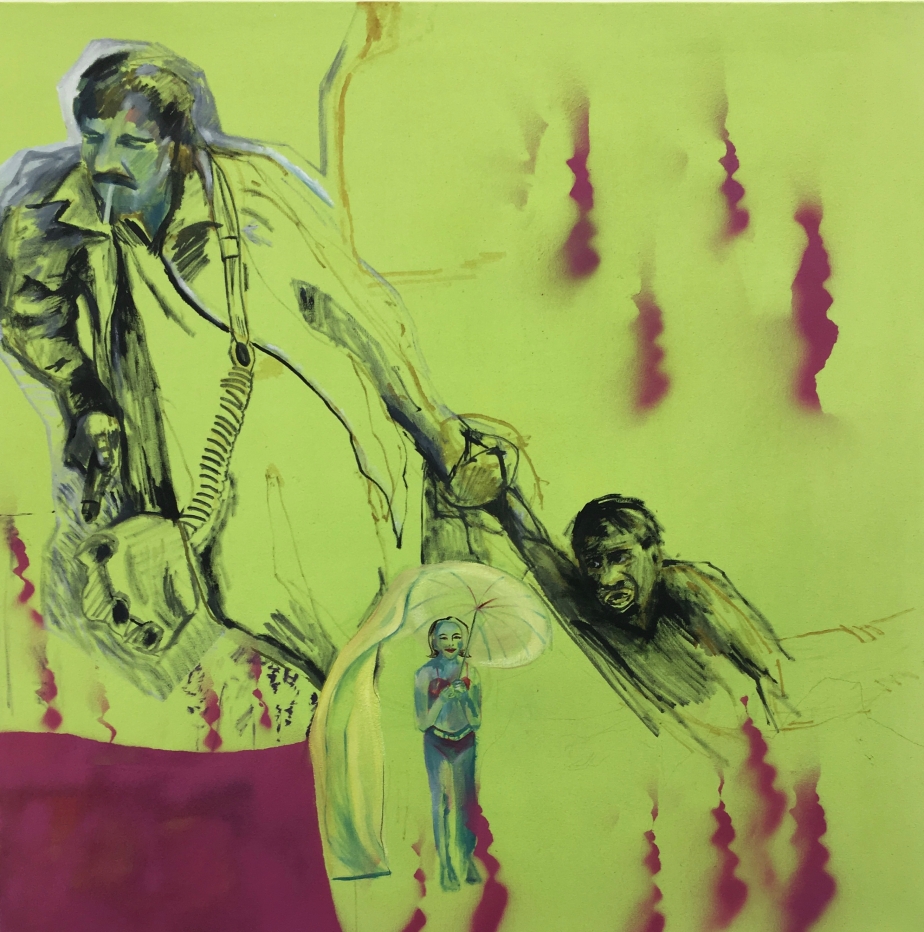 Work in progress: Developing these collage ideas from my sketch book, I plan to work in a series so that the paintings inform each other. I also think that the final paintings could be much bigger. Or much smaller, but I tend to paint better, bigger. 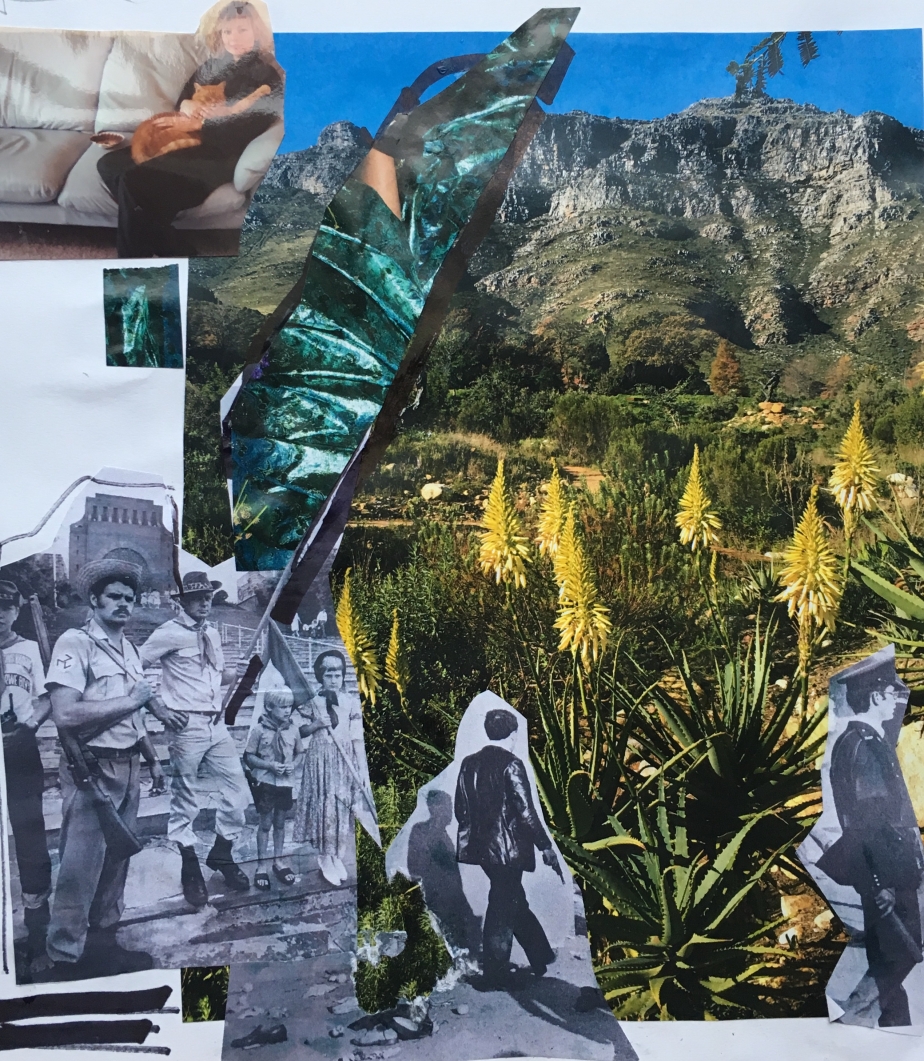 This is about the staunch right wing Afrikaner resistance movement called the AWB, with indoctrinated children, and the Voortrekker Monument in Pretoria in the background, a bastion of their fight for independence from the colonial Cape. They would hold annual rallies here, this one in 1981, exclusive to this particular group. Substituting the flag with a shiny fabric leaf subverts the serious occasion. The mountains are the Helderberg outside Stellenbosch, near Cape Town. 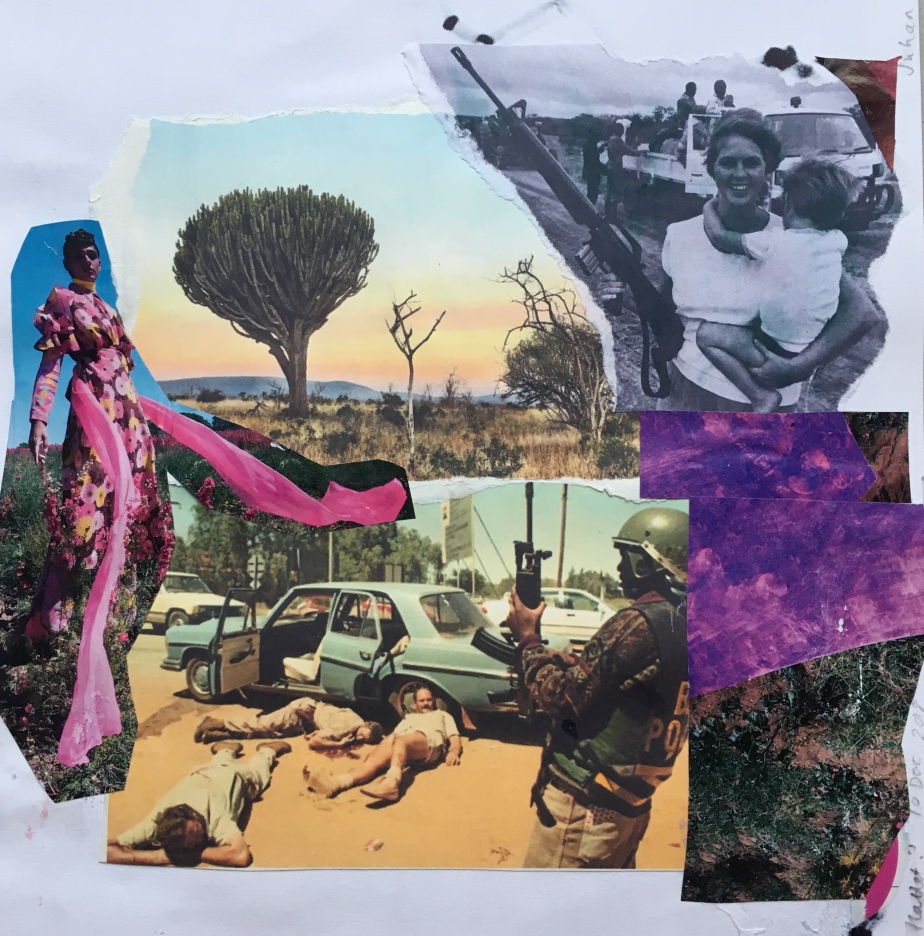 This woman holding a child and a gun is a powerful image and was typical of the farming community in the Northern Transvaal where my father lived and where many  murders occurred during the 80’s and 90’s, and still do today.

Senzenina is a political anti-apartheid struggle anthem performed here by Monde Mdingi with the Cape Town Youth Choir. It is a protest song traditionally sung at funerals. Senzenina means, “What have we done” with the implication “what did we do to deserve this?”

Could I use sound in an installation with paintings? This sound? To create an experience of paintings, not a film.